Just wanted to let everyone know that Alum is included in IndieGala's Weekly Bundle: “Every Monday Bundle” (August 17), and is now live HERE

If you haven't had a chance to purchase the game yet, this is a great way to get Alum and 5 other great indie titles for as low as $1.99!

If you haven't had a chance to purchase Alum yet, and you want to purchase it at a discounted price, it is now available as a "pay-what-you-want" deal on Indiegamestand.com. 10% of each sale goes to GGWO.org, global missions. Here's the link to the deal page: / 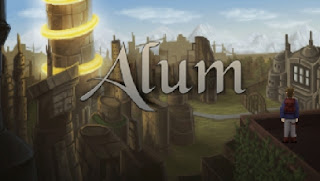 Alum has officially been released!

We are excited to announce that Alum has officially been released! It is now available on Steam, for PC, Mac, and Linux and is also available DRM-free (PC only), right here on our site! We also have a separate Steam page for the soundtrack, if you're interested in purchasing the music from Alum. There is also an updated Demo, which includes voice-acting and fixed/added content, on there as well. If you haven't heard of Alum here is a brief description of the game's synopsis and features:  Alum is an original point-and-click adventure game. It has the nostalgic feel of the classics, mixed with modern game-play elements and pacing that caters more towards this generation. The world, story, and characters lean towards a "RPG-esque" style, while the game-play mechanics and puzzles stay true to the classic point-and-click style.  Guide Alum on his journey through the dangerous, icy, "Land of Tide". Help him discover the truth about his city, Kosmos, and the mysterious epidemic known as "The Vague", that has been plaguing the city. As the tale unfolds, it will keep you enthralled all the way up to its epic conclusion. Features:
-----------------------------------------------

On behalf of Crashable Studios, we want to give a huge thanks to all our backers & supporters for all of the encouragement and support. We sincerely hope you enjoy the game.  Cheers!  - Crashable Studios

Alum has officially been released!
Posted by at 11:03 AM

Check out the new "Arise" trailer, for Alum! The game will be released on Steam, on the 15th - This Friday! So excited to share it with y'all.

In order to clear up any confusion about Alums release date, I wanted to do a little post to inform everyone of what's going on.


We originally were going to release February, but the game ended up taking longer than we had anticipated to finish. In a later kickstarter update video (I think it was #24), we mentioned it was pushed back to a March release. So why are we still working on the game and not releasing it to you guys yet? Well, the answer is tricky and multifaceted, but here's my best explanation:

We originally planned to releases an early version of the game to the kickstarter backers, that would not include the voice-acting in early March. This would give us a chance to bug test the game and fix minor errors, then when the voice-overs were finished being recorded, edited, and put into the game, we would release the complete package via an update download of some sort... BUT, we ended up deciding against doing that because we felt it would detract from the overall experience, and would actually be sort of a disservice to our kickstarter backers. We want to release the best possible game, "out of the gate" to everyone, all at once.

Another reason for the delay is that we ended up adding a few minor things to the game that we decided would be cool and would add to the experience. For example, I made an "overview" version of Kosmos city when you use the "eye" action on the city. We also incorporated a run animation during frantic sequences. A few things like that have been added as sort of "icing on the cake", if you will.

So, basically we want to release a complete version of the game that is polished and includes the voice-overs, is play-tested, and bug-free (cross my heart hope to die). Hence the extra wait time for release. Anyway, enough jabbering about development struggles.

As developers, we want Alum to be made available to as many people as possible... So, we have recently launched Alum on Steam to be voted onto there "greenlight" service, in hopes to raise awareness and get enough "yes" votes to secure a spot for Alum to be sold on Valve’s digital PC store, come full release.
We ask if you have a moment to click the link below and give us some positive votes for our game. Also, if you know anyone that would be interested in buying Alum on Steam, please let them know!
Also, we have updated the media section on our site. We've added all-new screenshots, and our trailer video, as well.


Thank you guys so much, for your encouragement and support.
Posted by at 1:01 PM

Excited about the VGU-con coming up this weekend! Come hang out with crashable studios & friends on saturday and sunday (the 16th and 17th) in the "Alum" booth. We will be sharing artwork, discussing the game, showcasing a trailer (including footage of new areas of the game), and playing our hand-built arcade machine. Tickets are available on their site: vgu-con
Posted by at 10:17 AM 1 comment:
Older Posts Home
Subscribe to: Posts (Atom)